Want to compare flight routes around the world?

From ancient Greece, the human being seeks to control the sky. Two prisoners, Icarus and Daedalus, in the Minos Island, built wings with feathers and beeswax to escape his prison.

This myth talks about the desire we all share: to fly, to conquer and use all that great empty space. And we succeeded. We’re up in a thousand ways, we fly and we want to keep flying. It shortens distances, connect us, it allows us to trade, meet, see.

Thanks to the dynamism of CARTO’s technology and Geographica’s design, we hace Flight Routes, where in a simple map we show the 50 busiest airports in the world. We can know the number of passengers passing through them. From the nearly 100 million passengers in Atlanta Airport to 239 daily flights from Frankfurt passing through 86 million passenger in Beijing or 73 million in London. Everything is spectacular. 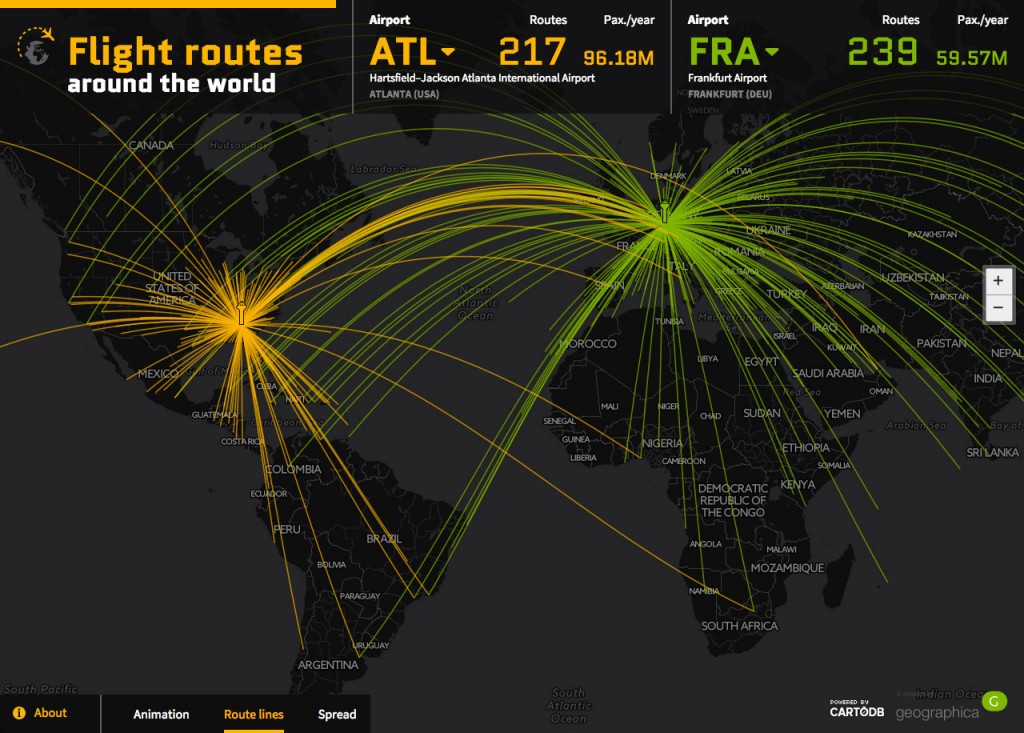 Flight routes around the world

At Geographica we love this kind of works: answering questions after analyzing a bunch of data, so let me share with you the insights extracted from this map.

Geostrategic balances are changing around the world; the most important of them is perhaps the change of equilibrium between the Atlantic and Pacific axis. New conflicts, like the Ucranian one or the war on ISIS are rendering old flight routes unflyable and forcing airlines strategists to change traditional and established routes and hubs for new ones. All this has an impact on the global network of air traffic.

Simple quiz as an introduction to the project

You can check it out at http://flightroutes.geographica.gs